How the novelist helped his heroine

In May, 2018 my wife and I were on vacation in Spain. We took an easy side-trip to Gibraltar, to spend the day. I (momentarily) mastered my acrophobia to take a cable-car to the top of the storied Rock, which had great views … along with the famous monkey residents (barbary macaques).

Descended from the Top of the Rock, I also encountered the to-be-expected tourist items, but the inevitable fish-and-chips, accompanied with John Smith’s Ale, were really not so hard to endure. 🙂 There was also the iconic Veddy British “pillar box”: 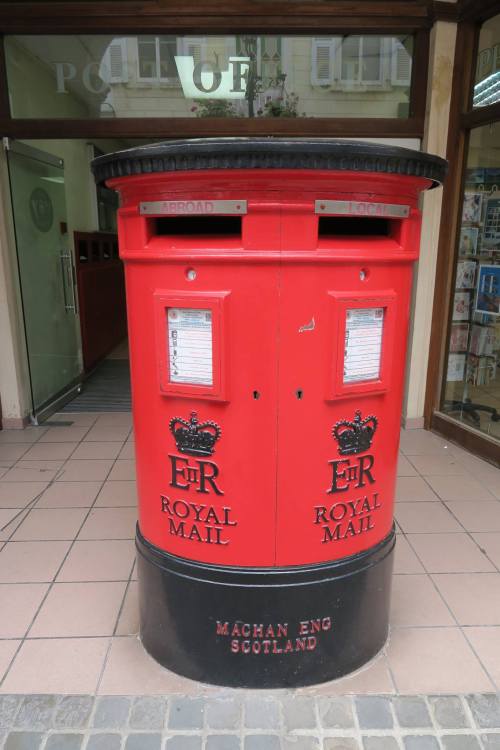 Being the literary character that I am, I recalled the famous (in certain circles) linkage to one of my very fave novelists, Anthony Trollope.  Trollope’s day job was with the Post Office.  In 1854 he recommended that pillar boxes be installed in the Channel Islands.  They were the first mailboxes in Britain.  By the next year they had spread to London.  No longer need one make a trek to the post office to mail a letter.

I recently finished Trollope’s novel The Duke’s Children (1880).  (I have now concluded my traversal of his “Palliser” novels.)

One of the plot threads concerns Lady Mary, the Duke’s daughter, who is in love with a gentleman — Frank Tregear by name — whose station in life, the Duke feels, is beneath her.  He has forbidden the couple to see each other.  Lady Mary is, at one point, staying with the Countess, Lady Cantrip, who has been charged by the Duke with the challenging task of keeping an eye on her, where her romantic life is concerned.

Though she knows the practice would be frowned upon, Mary has not actually promised not to write to Tregear.  When he writes to her, she can not resist replying.  And, in Chapter XXIV:

The next morning Lady Mary showed [Lady Cantrip] a copy of the reply which she had already sent to her lover.

Dear Frank,
You may be quite sure that I shall never give you up. I will not write more at present because papa does not wish me to do so. I shall show papa your letter and my answer.
Your own most affectionate
Mary.

“Has it gone?” asked the Countess.
“I put it myself into the pillar letter-box.” Then Lady Cantrip felt that she had to deal with a very self-willed young lady indeed.

So … if Trollope had not (in so-called “real life”) advocated for the pillar-box, who knows what might — or might not — have happened?  Would Mary have been able to navigate her way to the actual brick-and-mortar post office, unescorted as she would likely have had to be?  Who knows?  They do say “Amor vincit omnia” … but isn’t it nice that the Trollope with the day job was able to give Mary a helping hand?